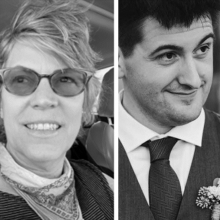 This month, we're highlighting two of our Meriam family by sharing their Five Favorite Books with the campus community -- or five of their favorite books, we should say, because who only has five favorites?  Elizabeth Tibbets has worked in both the Administration and Acquisitions departments at Meriam Library, and is currently pursuing her Masters in Library Science.  Ian Allen is in our Facilities Management department, coming to us from Butte College Library.  Ian holds a Masters in Arts in English Literature from Chico State.  Let us know what titles you most appreciated here -- and what books would you share of your own Five Favorites?

Frankenstein by Mary Shelly a family favorite. My boys and I read several books together over the years such as the Harry Potter series, Dune, Dracula, etc. But, Mary Shelley's work in Frankenstein has so much depth regarding character and assumption. Great discussion book.

Phillip Yancey's work is earthy and well rounded, especially in this title, The Jesus I Never Knew.

Homegoing and Transcendent Kingdom by Yaa Gyasi. New author Yaa Gyasi's books are engaging and always a great recommendation for anyone searching for a moving subject and book to engage with.

Jim Butcher's Grave Peril is where I feel that his Dresden Files really starts to take off, making an already fantastic contemporary fantasy/mystery series all the better. Lots of complex characters, tons of fun with magic, villains that have solid motivation, and the plot is well-paced.

Brain Herbert's The Machine Crusade is a kind of expanded universe for Frank Herbert's Dune series. The events of this book happen before the originals and establishes the dynamics between the Great Houses, why thinking machines can't be trusted, how the Spice was first introduced and used.

Eoin Colfer's Artemis Fowl series is by far one of my favorite rides of all time. Tech-savy faeries, criminal mastermind conspiracies, and lots of tongue-in-cheek comedy fill every page. The cast of characters, their interplay with one another, and their continual growth are also exceptionally well executed.

Another YA title to make the list is The Amulet of Samarkand by Jonathan Stroud. A vividly detailed coming-of-age story with a bunch of twists and turns, it'll keeps you guessing as the plot continually thickens. The balance of serious scenes and comic relief only serve to help the storytelling.

His Majesty's Dragon by Naomi Novik is a bit of a guilty pleasure of mine that nonetheless does a great job of tackling many social issues (particularly class, gender, and race discrimination). This alternative history/fantasy takes place in during the Napoleonic Wars where dragons are used as a form of aerial corps, and a beautiful attention to detail make this series a fun and immersive read.