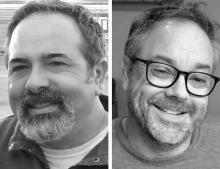 Mike Bello is Meriam Library's Cataloging and Electronic Resources Librarian and came to Chico via UC Santa Cruz.  Mike holds an MLIS from San Jose State, and a Bachelor's in Criminal Justice from Sacramento State.  William Cuthbertson is Instruction Coordinator for the library and the librarian for areas including Political Science, Social Work, Undergraduate Education, Geography, and the College of Business.  William received his MLS from Indiana University and his BA in English from Westminster College in Salt Lake City.

They both share a love of Stephen King, so you'll find their individuals picks and other favorites below.  What's your favorite Stephen King Novel?  Or do you have other horror books to recommend?  Put your own Five Favorite Books in the comments!

The Lion, the Witch, and the Wardrobe by C.S. Lewis. I haven’t read this since I was a kid, but it is responsible for sparking my interest in books and reading. It is also why I became interested in other works of fantasy, such as King Arthur and His Knights of the Round Table, and, of course, The Lord of the Rings.

Misery by Stephen King. I was on the edge of my seat reading this book, and it was my introduction to Stephen King. I’ve been a King fan ever since, though I prefer his earlier works. I like that King’s books span different genres - horror, science fiction, fantasy, mystery, and suspense.

Fermat’s Enigma: The Epic Quest to Solve the World's Greatest Mathematical Problem by Simon Singh. Pierre de Fermat claimed that the theorem “x^n + y^n = z^n had no solutions in positive integers if n is an integer greater than 2” was true, but he left no proof. This is the story of a 20th century mathematician, Andrew Wiles, who takes on the challenge of proving “Fermat’s last theorem.” Simon Singh does a great job of writing this for the layperson, though a lot of the math still went over my head. It is an entertaining look into the history of mathematics and the pursuit of an elusive proof.

John Adams by David McCullough. I think biographies are a great way to learn the history of a particular period. McCullough’s narrative in this book really brings the characters and times to life. I didn’t know much about John Adams before reading this book, but I was enthralled by his amazing life, from his early years to death, in this epic work of history.

In the Garden of Beasts: Love, Terror, and an American Family in Hitler's Berlin by Erik Larson. A history professor, William E. Dodd, accepts the U.S. ambassadorship to Germany expecting it to be an undemanding role. However, he and his family will be occupied with the challenges and horrors of mob violence, attacks on American citizens, Jewish persecution, and the rise of the Third Reich. Interesting and intense eyewitness accounts of events during the early years of Hitler’s reign.

Firestarter by Stephen King.  I owe half of what I love about a life of reading and most of what I distrust about the government to this 1980 horror novel, and I’m so grateful for being introduced to Stephen King early enough that I could grow up alongside his twisted and horror-filled worldview.  Heart emoji, Stephen King!

The Autobiography of Malcolm X as told to Alex Haley.  I read this as a college student and the world never felt the same again.  A man who repeatedly reinvented himself to defy the expectations others imposed, Malcolm X was on a search for ultimate, less limited truths than our institutions and figureheads offered.  This is maybe the one book written I think everyone should read; an essential American story.

What it Takes: The Way to the White House by Richard Ben Cramer.  Epic in every sense, a person comes away from this massive, brilliant book knowing that there is probably no experience on the planet like running for America's president, and that so few are up for the job – and probably fewer among those who make it.

An Adultery by Alexander Theroux.  An unsheltering and emotionally torturous novel about art, artists, guilt, obsession, and a hyper-scrutinized love affair.  This novel was unlike anything I had read before it, or pretty much since, and I couldn't stand it until I realized I was in love with it.  Maybe not the healthiest attitude, sure, but yet, here it is, years later: a favorite.

All the Little Live Things by Wallace Stegner.  As with most of Stegner's novels, this is a book about reasons to live; reasons its narrator would rather avoid were they not delivered with the promise of a fulfilling and singular friendship. I’ve returned to this book to glint new meaning from its pan-generational viewpoints (or when I’m in the mood to break my heart) and never left disappointed.  Wallace Stegner was an amazing introduction to Western Americana, and I've loved both ever since.