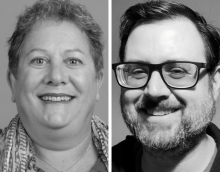 Michelle Mussuto is our newest faculty member, and the Librarian for Agriculture, Natural Sciences, and Sustainability.  As of this writing, she’s been at Chico State for only two months!  She comes to Chico State after having been the Acquisitions and Collections Coordinator at the State University of New York, Maritime College.  She received a Masters of Information Studies from McGill University in Montreal, Canada. Michelle LOVES libraries and is fulfilling her dream of being a faculty librarian in an academic setting.  She can’t wait to start instructing students on information literacy and research principles.  When she’s not sitting in some corner or café reading a book, you’ll find her exploring the city of Chico and its environs.

Chris Paintner is Meriam Library's Digital Collections/Thesis Remediation Specialist, ensuring accessibility for digitized documents in Special Collections.  He holds a B.A. and M.A., both in History, and both from Chico State.  He also holds a Masters of Library and Information Science from San Jose State.  He is a fan of cats and board games, and so was destined for library work.

Michelle and Chris have shared with us a wide range of favorites and classics.  We hope you try out one of their picks. While you're thinking of the holidays, we hope you find time to treat yourself to something good to read.  And why not write up your own five favorite books to share for the cozy holiday season?

Fahrenheit 451 by Ray Bradbury. This is a book I read every year. It reminds me that books are mired in politics even though we often think of them as ‘just a book’. It also reminds me of the individual and collective heroics people assume to save the written word from those that are histrionic, evil, and, mis-guided. The book is as relevant today as it was when first published in 1953. 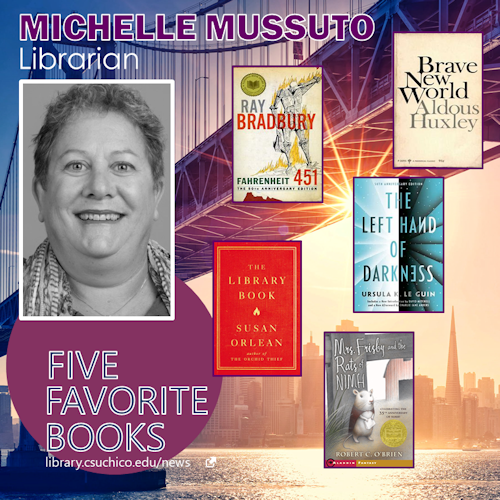 Brave New World by Aldous Huxley.  I read this book every year too.  In trying to make the perfect society, those in power make the decisions as to who can take on what roles.  The perceived freedom of the classes is controlled by drugs.  Yet, there are a few people who escape the classism to achieve individualism.  For this they pay the heavy price of being banned from society.  Today, as we continue to ostracize and demonize people who don’t adhere to standards that those in power have deemed fit for society, we preach diversity, equity, and inclusion.  I don’t believe a perfect society exists.  But with loud voices and continuous action, perhaps we can avoid banishing those that are ‘other’.  The book is as relevant today as it was when first published in 1932 (guess I like old books).

Mrs. Frisby & the Rats of NIMH by Robert C. O’Brien.  This is actually a children’s book.  And another book I come back to again and again.  Here we have disparate species learning to get along for the greater good.  The rats are technologically sophisticated and literate.  Mrs. Frisby (a field mouse) takes on myriad risks to save her sick son and prevent her home from being plowed under.  Every animal character, who would otherwise be enemies, come together to save Mrs. Frisby’s son and home.  Not a dystopian story.  A story of maternal love, overcoming adversity, and the benefits wrought by society working with, rather than against one another.  Written in 1970 this book is worth at least one read.  The rat technology will surprise you.

The Left Hand of Darkness by Ursula K. Le Guin.  A story of the tenuous peace held by cultures on a forbidding planet and the intrusion of a possible colonizer.  I read this a long time ago and picked it up again this year.  The writing is brilliant.  The story line full of wonderful sights, curious planetary inhabitants (a genderless society!?), and the evil that lurks beneath the planet’s scarce resources.  Written in 1969, it is a timeless story about humankind’s resistance to change and acceptance of those with different principles and lifestyles.  It should definitely be on your reading list.

The Library Book by Susan Orlean.  A ‘new-ish’ non-fiction book written in 2018 about the treasures contained on library shelves, in library buildings, and those that work in and frequent public libraries.  The underlying plot/premise of the book is the 1986 fire at the Los Angeles Central Library.  But the book is so much more than the hunt for the arsonist and their motive.  It’s about what makes libraries run; how libraries adapt and change to stay viable in communities.  My favorite hangout place is the library.  It’s the first place I go to when in a new city.  This book is truly a love letter to books & libraries.  Susan Orlean did a ton of research for this book.  If you haven’t read it yet, put it on your list.

The Rise and Fall of the Dinosaurs: A New History of Their Lost World by Steve Brusatte.  Avoiding language and concepts only familiar to paleontologists, Brusatte crafts a brilliant narrative documenting the natural history of dinosaurs in a way that’s accessible to anyone with even a passing interest in the subject.  My favorite chapter is a second-by-second recreation of the moment when a massive asteroid collided with the earth and ushered in an extinction level event that culminated in the disappearance of non-avian dinosaurs. 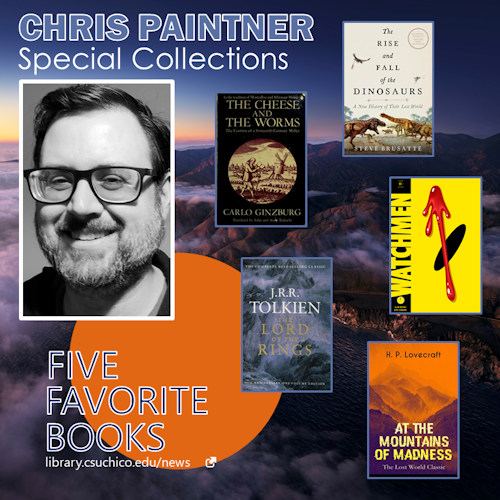 Watchmen by Alan Moore and Dave Gibbons.  Alan Moore’s infamous distaste for the superhero genre heavily influences Watchmen’s cynical and gritty interpretation of a world where heroes exist as deeply flawed individuals and makes it one of the most essential reads in comics.  The “heroes” in Watchmen commit clandestine acts of terror and overt war crimes on behalf of five-term president Richard Nixon and generally foster a culture of fear, distrust, and anger in an alternative vision of 1980s America, culminating in a megalomaniac’s plan to unite the world and bring about lasting peace by killing millions of innocent people.

The Cheese and the Worms by Carlo Ginzburg.  I was a History major, so I limited myself to just one Historian’s work to make my five choices a bit more varied!  Ginzburg’s book is one that I find myself most frequently recommending to people who don’t read much history.  A narrative of the strange intellectual life and religious beliefs of a sixteenth-century miller, Menocchio, in the Friuli region of northeastern Italy, this microhistory draws on Inquisition records created following interrogations of the miller and the resultant heresy trials.

The Lord of the Rings Trilogy by J.R.R. Tolkien.  One of the first fantasy stories I read, Tolkien does an amazing job building a world and establishing its history through the adventures of the fellowship as they travel into the heart of Mordor to destroy the source of Sauron’s power.  I love the friendships between the hobbits and how their commitment to each other helps them persist in hopeless situations.

At the Mountains of Madness by H.P. Lovecraft.  A short story about an Antarctic expedition that uncovers terrifying secrets beyond human comprehension.  The alienness of the beings that the expedition uncovers are described in brilliant detail and really stretched my imagination to conceptualize, which contributes to a constant building of tension and looming sense of oppressive doom that makes it such a great work of horror.  Things just keep getting weirder as the story moves forward, and I love it!