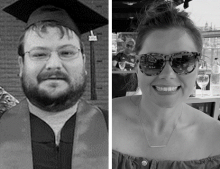 Collin Miller is a Technician for Library Equipment & User Support in Meriam Library's Systems & Technology department.  He graduated in 2021 from Chico State with a Bachelor's of Science in Business Information Systems, with an option in Management Information Systems.  Before coming on with Meriam Library full-time, Collin worked in the Library Systems office for two years as a student employee.  Emily Amarel works in the Library Dean's Office and holds a Bachelor's of Arts in International Relations and Spanish from Chico State, and a Master's of Fine Arts in Creative Writing from The New School (New York, NY).

Collin and Emily have shared with us a wide range of favorites just in time for Fall Break.  We hope you try out one of their picks. While you're enjoying your Pumpkin Pie next week, why not write up your own five favorite books to share?  What memories and experiences do you find yourself connecting to with your favorite books and authors?

East of Eden by John Steinbeck.  Out of all the books that I was required to read in high school, East of Eden was the one I enjoyed the most. I enjoyed this book because it took place in the Salinas Valley, which is an area that I was familiar with. This made reading the book more enjoyable because I could connect locations that were described in the book to real locations. Steinbeck also uses lots of descriptive language to depict what was happening in the book, which helped me visualize the scenes in the book in my head and connect them to real world places.

Ready Player One by Ernest Cline.  I consider myself to be a technologist so I ready enjoyed Cline's look a semi-dystopian future where people choose to live in virtual world called The OASIS via a virtual reality headset to escape the issues that plague them in the real world. The virtual world described in the book is both a game and society where things like education happen. This book also looks at how a monopolistic corporation will do anything to gain control of The OASIS in order to start charging users for access to it. But the main character prevails with the help of his friends and chooses to split the prize with them and keep The OASIS open to all.

Dune by Frank Herbert. My interest in Dune was sparked by the most recent movie adaptation of the book. I decided to read the book because I did not fully understand what was happening in the movie. Reading the book helped fill in gaps that movie left which led me to better understanding the plot. This book captured my interest with its multilayered story about the desert planet Arrakis.

The Martian by Andy Weir. The Martian is my favorite science fiction thriller. My enjoyment of this book stemmed from the fact that the science elements of this book are well-researched and accurate to known scientific knowledge. I also enjoyed how Weir referenced other real NASA spacecraft, which he uses as a plot point to help save the main character.

Steve Jobs by Walter Isaacson. I have long been an avid watcher of the tech industry, especially Apple. I have long been fascinated by how Apple is able to enter segments of the consumer electronics market and become the dominant player in that segment. Apple's dominance in the consumer electronics industry was thanks to the visionary leadership of Jobs. This explosive growth came in Jobs's second stint as Apple’s CEO from 1998- 2011, when he released products such the iMac, iPod, iPhone and iPad. On a more personal note, I read this book to better understand Jobs as a person. I read this book as soon as it was released which was shortly after his death as result of losing his battle with pancreatic cancer. This hit close to home for me because around the time of Jobs's death my father was diagnosed with pancreatic cancer, a battle which he too would lose, passing away in the following December.

As a little girl, Miss Rumphius by Barabara Cooney was one of my favorite books. Cooney’s illustrations are gorgeous and as a kid, the idea of “doing something to make the world a more beautiful place” really resonated with me. Reading it now, I’m impressed that the story centers on an unmarried woman, Alice Rumphius, who travels the world alone and later suffers a debilitating back injury. That marriage and children are never mentioned makes the book feel very ahead of its time (it was published in 1985).

A few years ago, I read Of Human Bondage by W. Somerset Maugham for   my book club. It’s hard for me to pinpoint why I like this book so much, but I think it has to do with the main character’s ongoing dissatisfaction with his own life; it’s as frustrating as it is human.

I read Ly Tran’s House of Sticks last year and it floored me. It’s a beautifully written memoir about Tran’s move from Vietnam to New York City with her family; hers is a unique perspective of the immigrant experience.

Something I love about Toni Morrison is that she’s a reader’s writer and a writer’s writer, her prose is beautiful and each story still serves as a page-turner. Beloved is a must-read. It can be revisited over and over again, each time revealing a new theme or insight.

Is it even a book list if there isn’t a little magical realism? Gabriel Garcia Marquez’s One Hundred Years of Solitude is one of my favorites. Even years after reading this book, I can still remember distinct imagery and scenes.