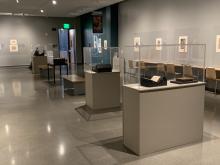 At the Janet Turner Print Museum a collection of rare books selected from the Meriam Library Special Collections and University Archives are currently on exhibit.

Renaissanced was curated by History Professor Jason Nice and students in Renaissance Civilization: 1300-1550, students explore prints in the Turner Collection to analyze and complicate the enduring themes of the Renaissance.

Meriam Library books with notations by Jason Nice include:

Following the first printing of the Latin Vulgate Bible in the 1450s by Joannes Gutenberg, additional Latin Vulgate Bibles proliferated during the later fifteenth century.  This is the oldest printed book in the Meriam Library Special Collections.

This book, a reproduction of a Roman treatise, was published by the highly influential printer Aldus Manutius whose printing press in Venice was renowned for printing portable and inexpensive volumes from Ancient Greece and Rome.  Manutius also developed and popularized a new typeface that would gradually replace the “Gothic” font favored by German printers.

After Manutius, Venetian printers continued to reproduce ancient volumes, both in the original Latin and in vernacular translations.  In this case, the printer Niccolò Zoppino has reproduced an Italian translation of Palladius’s fifth-century agricultural treatise.

The fourteenth-century Italians Boccaccio and Petrarch are often described as the inaugurators of Renaissance thought.  Boccaccio’s Decameron, a collection of 100 stories told over ten days by ten narrators, has inspired countless people from Geoffrey Chaucer onwards.  This edition, translated into Italian and published in Venice, is one of three early Venitian printed books in the Meriam Library Special Collections.

Like the translation of Palladius, this volume reproduced the work of the Greek physician Galen whose ideas, while long-known to Arab physicians, were reproduced and shared widely during the Renaissance before Andreas Vesalius and others began to challenge Galen’s assumptions about medicine and the human body.

For approximately a century, from the publication of Jacob Burckhardt’s The Civilization of the Renaissance in Italy (1860) to the years preceding the cultural upheavals of the 1960s, the Renaissance reigned supreme as a world-historical era of transformative change that ushered in the modern world.  In the minds of many European and American men, the Renaissance, like the fall of Ancient Rome, was indispensable to the organization of time (ancient, medieval, modern) and the progress of history.  Medievalists have long decried the oversimplified and overinflated role of quattrocento Italy in historical explanations of the modern world, and their skepticism was amplified in the 1960s and 1970s by women, people of color, and others who have long been underrepresented or excluded from history.

By 1978, as explained by William Bouwsma in his presidential address at the annual meeting of the American Historical Association, “the venerable Renaissance label has become little more than an administrative convenience, a kind of blanket under which we huddle together less out of mutual attraction than because, for certain purposes, we have nowhere else to go.”1  The speaker then joined a chorus of historians who have attempted to rescue some significance from the term Renaissance, and students of history continue to grapple with how (or whether) to tell the story of the Renaissance.  In Spring 2019, students in History 411 “Renaissance Civilization: 1300-1500” explored these questions by curating and researching over two dozen prints from the Janet Turner Print Museum collection.

Renaissanced includes prints from the European Renaissance, most notably those of the celebrated German printmaker Albrecht Dürer, but it primarily explores the idea of the Renaissance in a diverse range of prints from around the world during the last five centuries.   Students in History 411 produced the labels for each print in the exhibition, explaining each print, its historical context, and how it relates to a theme of the Renaissance.  Students explored and deconstructed traditional, Burckhardtian, themes such as the state as a work of art and the development of the individual, and listened for echoes of Petrarch or Pico della Mirandola’s humanism in contemporary art.  Sometimes, the echoes were painfully clear in Machiavellian images of violence and power, but more often the themes of the Renaissance appear distorted and disfigured by time and artistic license.  Together, the prints in this exhibition suggest that the Renaissance does exist as something more than the administrative label feared by Bouwsma, but as something much more complex and contradictory than earlier generations of historians had imagined.